Meta-analysis: the top of the EBM pyramid 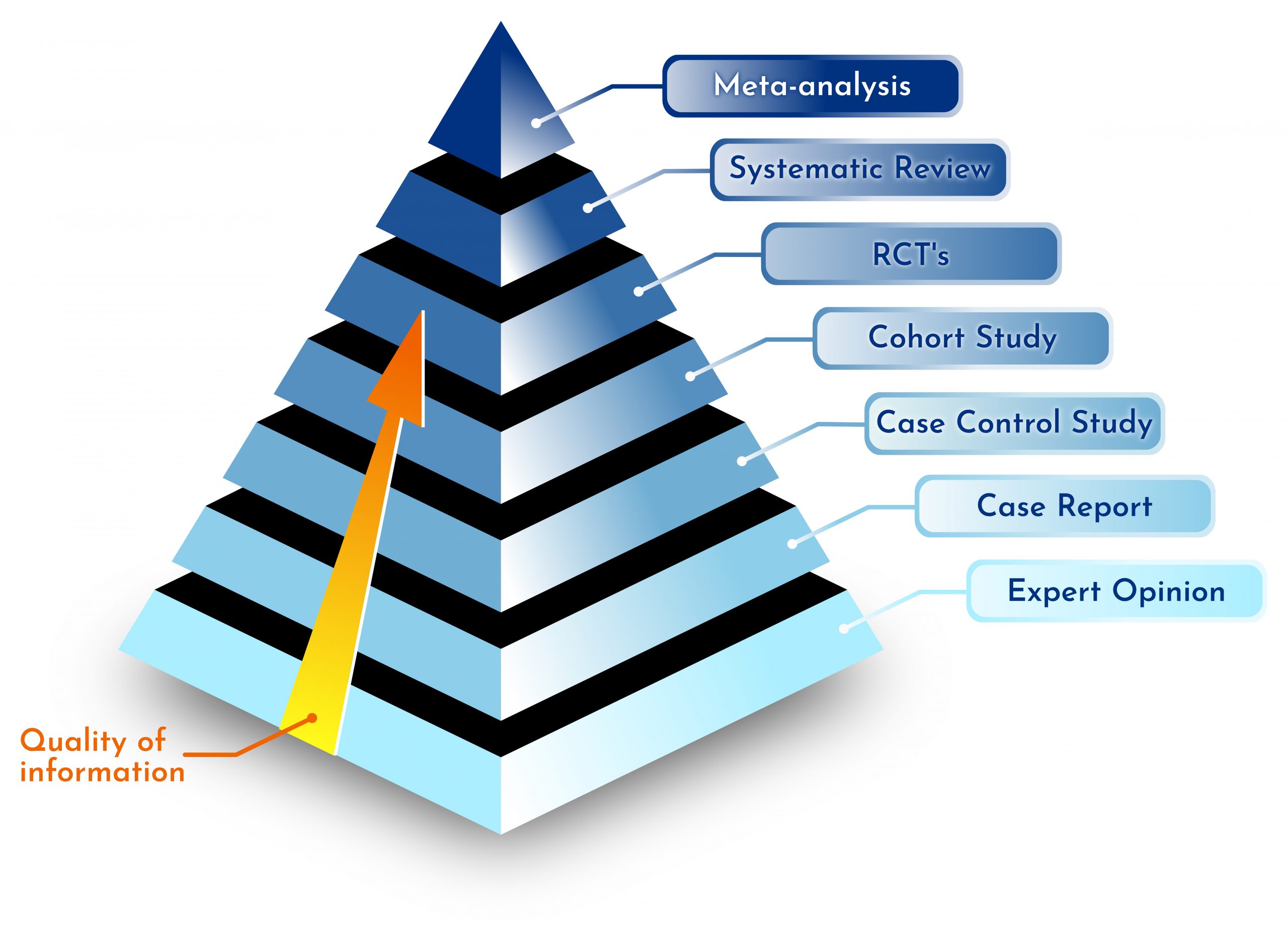 In the context of evidence-based medicine (EBM), meta-analysis (MA) together with systematic reviews represents the most relevant form of scientific evidence. A meta-analysis may improve the medical evidence allowing researchers to achieve important goals in their everyday clinical practice. Even in case of no evidence, the meta-analysis findings can be relevant. This my last statement could be appeared unusual or strange. In a scientific world in which the achievement of statistical significance is considered in many cases the best result, the lack of evidence could be considered an undesirable outcome. But, this is not true.

What is a meta-analysis?

According to Michael Borenstein (1), with the term meta-analysis, we define all those statistical procedures that synthesize results from a series of studies. In other words, we can think about meta-analysis as a statistical method aiming to build a bridge among different scientific studies on the same topic.

The role of such a statistical tool is to help clinicians and researchers in identifying the overall trend (effect size) among several studies’ results. As a results, this methodologica approach allow them to describe the overall evidence about a specific topic so improving the quality of evidence and increasing medical knowledge. Surely, the most well-known application of meta-analysis is related to the evaluation of the impact of a new treatment vs. standard treatment in preventing a specific outcome. However, in the last years, diagnostic meta-analysis and network meta-analysis have been developed to increase the quantitative tools available to medical research.

Focus on MA and RCT

Given the high value attributed to the MA in evidence-based medicine, there is an interconnection between meta-analysis and randomized controlled trials (RCT). As meta-analysis represents the top of the EBM in collecting the evidence from different studies, at the same time, RCTs are the highest form of EBM in individual studies. Therefore, these two entities can be joined together to create strong evidence.

However, to achieve this strong evidence, meta-analysis should follow a series of rigid methodological rules. Indeed, the strict meta-analysis methodology allows combining two or more studies without generating biased findings.

Many manuals and guidelines are online available to carry out a MA for intervention studies; among them, the Cochrane Handbook for Systematic Reviews of Interventions is the most authoritative guideline. The guide describes the standard methods to apply in the whole review process: how to plan a review, how to search and select studies, how to collect data, how to evaluate the risk of bias of included studies, perform statistical analysis, and so on. In addition, although the core of the guide is the healthcare interventions, the handbook is completed with information about more specialized topics such as non-randomized studies, adverse effects, complex intervention, patient-reported outcomes, prospective meta-analysis, and qualitative research (2). For each researcher, knowing how Cochrane Handbook works and what kinds of topics are addressed is fundamental for conducting an optimal systematic review with meta-analysis.

When is it necessary to conduct a meta-analysis?

As in other scientific situations, deciding to conduct a MA is not the desire of a researcher (or better, not only a desire). Instead, it results from an accurate literature analysis and a need to fill a gap in the literature. In many cases, the choice to perform a meta-analysis is due to the coexistence of two elements: a series of conflicting results about a specific topic and the presence of a series of studies that used similar methodology and population to ascertain a well-defined outcome.

The difference between a meta-analysis and a narrative review consists mainly in the different approaches to the findings of the included studies. A narrative review compares results derived from various studies based on the p-value. In contrast, meta-analysis aims to determine an effect size (not p-value) able to establish the consistency among the studies’ effects. Moreover, meta-analysis splits the dispersion among studies into random error vs real variance, quantifying the true difference among studies.

In case of no-effect, what are the conclusion of meta-analysis?

In each scientific research, achieving statistical significance is considered the top of the evidence. Therefore, a non-significant effect size should not have been considered a study’s tragedy or failure. In many cases, the lack of significant effect can be interpreted as a real lack of effect or a sign of significant heterogeneity among studies that prevent “capturing” the trend. Meta-analysis findings showing a lack of evidence are a good source of knowledge to address the scientific research. Above all, the role of meta-analysis is to determine scientific evidence showing at the same time the limitations observed in the including studies. It is not only a process to collect evidence, but it is a logical approach to highlight the pros and contr of the scientific evidence.

In conclusion, when a meta-analysis concludes that there is no certainty about a treatment or a diagnostic tool, new steps towards new kinds of works or new kinds of methodological approaches should be done to increase evidence. In many meta-analyses, researchers have concluded that further clinical trials are necessary. This is not a statement at the end of a paper, but it is a suggestion to the scientific community to promote and conduct higher and higher quality studies.

We use cookies on our website to give you the most relevant experience by remembering your preferences and repeat visits. By clicking “Accept”, you consent to the use of ALL the cookies.
Do not sell my personal information.
Cookie SettingsAccept
Manage consent

This website uses cookies to improve your experience while you navigate through the website. Out of these, the cookies that are categorized as necessary are stored on your browser as they are essential for the working of basic functionalities of the website. We also use third-party cookies that help us analyze and understand how you use this website. These cookies will be stored in your browser only with your consent. You also have the option to opt-out of these cookies. But opting out of some of these cookies may affect your browsing experience.
Necessary Always Enabled
Necessary cookies are absolutely essential for the website to function properly. These cookies ensure basic functionalities and security features of the website, anonymously.
Functional
Functional cookies help to perform certain functionalities like sharing the content of the website on social media platforms, collect feedbacks, and other third-party features.
Performance
Performance cookies are used to understand and analyze the key performance indexes of the website which helps in delivering a better user experience for the visitors.
Analytics
Analytical cookies are used to understand how visitors interact with the website. These cookies help provide information on metrics the number of visitors, bounce rate, traffic source, etc.
Advertisement
Advertisement cookies are used to provide visitors with relevant ads and marketing campaigns. These cookies track visitors across websites and collect information to provide customized ads.
Others
Other uncategorized cookies are those that are being analyzed and have not been classified into a category as yet.
SAVE & ACCEPT
Powered by